Don Willey shares his Journey as a Caregiver

Interviewed by By Emily Jung

Don Willey is the Business Manager for Laborers’ Local 110 in St. Louis. He joined the local in 1984 and worked for various contractors such as Fred Weber, McCarthy Brothers, K & S, J.S. Alberici, and Tarlton. In 1999 he joined the local staff as an auditor, then was elected to the Executive Board serving as Vice President, President, Secretary-Treasurer and now Business Manager. Today he sits on the boards for the Welfare & Pension Funds for the St. Louis Laborers, the Laborers’-AGC Training Fund, and the St. Louis Labor Council. His mission is “To Help People Live Better” in their jobs, homes, families and communities. So how did a Union official get involved with ARCHway? The short story, as Don put it, was because of his son Matthew Willey.

After a 15-year battle with addiction, Matt succumbed to an overdose, leaving his family to make the impossible decision of withdrawing life support. Matt’s story can be found as a Hope Fund Sponsor on [this] ARCHway Institute’s website. Talking to his friends and family showed his love for those in his life extended far. He was always willing to help and support others in any way possible. He had numerous talents excelling as a musician and cook. His intellect made him a true history buff. He loved baseball, and like any true St. Louisan, he was an avid Cardinal’s fan, rarely missing a game. The following poems/quotes give just a small glimpse into Matt’s life: 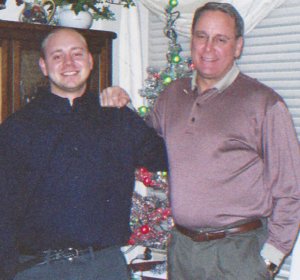 “A loving soul, flaws and all. I will never forget that shining smile, infectiously loud laugh, and giant warm hugs that lifted my feet from the earth. Even in your darkness, your intelligence and strength blanketed your ego. You were ALWAYS loved and you have left a void that can never be filled in my heart.” ~Your Loving Little Sis, Laura

I spoke before I thought, I ran before I walked.
Unguided and misused, I have finally blown the last fuse.
–Matthew Willey, date unknown, from his journal

Matt’s poetic and musical talents reverberate through his family. Though tragic, his passing served to fuel Don’s will to change how substance use and mental health disorders are viewed and treated, specifically in the St. Louis area.

Symptoms of the Disease

Don watched his son change as a result of his addiction. Individuals with a substance use disorder become people who lie, cheat, steal, and will bypass any moral or ethical boundary to get their drug of choice. This behavior often is not representative of the person; it is a symptom of their disease. The drug literally changes the physical make-up and function of the brain. In active use, Matt’s behavior wasn’t because he was weak-willed, his moral standards weren’t high enough, or because Don failed as a parent. The drug becomes more important than life itself, it becomes more important than your kids, and more important than your relationships.

Be Prepared for Relapses

Don was always relieved when Matt was in treatment or even incarcerated. Imagine being overcome with anxiety and fear for your loved one every second of everyday. These periods were his only sense of relief during those 15 years. Matt was released from prison without any Medically Assisted Treatment or an after-care plan. Don learned the first 2 weeks back out whether from prison or a 30 day stay in an inpatient facility are the most dangerous time. Relapse is almost guaranteed without any sort of follow-up or plan moving forward. Don wants other caregivers to know that relapses are a common occurrence and to take steps to prepare.

Don prayed a lot during that time. He prayed for his son to hit a rock bottom because many would argue that a SUD user is never going to get better until they lose everything: their house, car, job, family, and friends. When Matt was at his lowest point and dope sick, his only thoughts were of scoring dope to feel better. Medically Assisted Treatment (MAT) helps with these cravings and withdrawal symptoms. Medications like Suboxone and Vivitrol clear the mind enough for that person to consider other possibilities for treatment and to simply consider a better way of life. Don said he could hear the change in Matt after months of clean time, even more-so when he was in prison. His brain began to heal, and this was where real intervention could be effective. Medications can help prevent someone from spiraling further and hitting that rock bottom.

As a parent, Don’s advice is to really know your child: their family history, their emotional and mental health needs, and their stressors. Know what your child is doing in school, the good and the bad. Know if they are being bullied in person or online. He capitalized on the importance of really talking to your kids.

Many adolescents are prescribed pain medication when they have their wisdom teeth removed or for other surgeries. It is important to know the family history of substance use and mental health because this could impact the type of medication or the dosage prescribed. The more you know and the more you can share with your child’s doctor, the better.

The true trauma of a caregiver comes from the sleepless nights and the days wondering what more can be done. It’s the fear those who find out will judge. It’s the depression, anger and lack of hope. Caregivers become so overwhelmed, that they struggle in other areas of their lives. Don experienced that living life while caring for a loved one struggling with addiction is almost impossible. You get behind in work, your health begins to deteriorate, your financial status declines, and you can’t take care of yourself, your family, or your living environment. He compares it to having tunnel vision.

Don may have regrets or things he wishes he could have done differently knowing what he does now. However, he realizes that dwelling on those things doesn’t make a difference. His advice: “Don’t spend much time with it because it doesn’t do any good for anybody…………………….. and it’s certainly not going to bring your loved one back.”

Instead, he shares his story, raises awareness, and broaches those uncomfortable conversations to help others. Not a week goes by that he’s not had a conversation with someone about treatment and resources.

Construction, mining, entertainment, and health are the top industries dealing with addiction. Laborers wear out their bodies doing the work they do, and they are often prescribed pain management medications. During a presentation given to 200 construction workers for Suicide Awareness Month, Don said, “We’ve created the perfect system to harvest the ten percent that are predisposed to addiction. The Union may have great benefits and resources but we [construction workers] get in this business to build things and go home and have a beer and not worry about it, but we have our dysfunctional families and our addictions we deal with and we don’t use the therapy or the resources to talk about those issues, to heal the families.”

One of his biggest missions is to bring awareness to the resources available to his fellow Union brothers and sisters.

Seldomly addressed, a key to fighting this epidemic is to let the business community know how much it costs them not to address substance use and mental health disorders. No matter your career, if you have a loved one living with addiction and you are not getting the resources and education you need, it’s costing your company or organization thousands or even tens of thousands of dollars. Employees may be showing up physically, but mentally they are not able to work. Educating employers is essential.

Another part of this process for Don has been sharing his own struggles. He utilized a twelve-step program for thirteen years called Emotions Anonymous. The program helped him recognize his propensity to dismiss emotions instead of dealing with them. His strong belief in the benefits of therapy also led him to use it as a tool after Matt’s passing insisting, “you have to get yourself right before you can help anyone else.” In therapy, Don works through his role as a caregiver, as someone who has felt the effects of substance use disorder, and as someone who has struggled with mental health.

He started at Saint Louis University Hospital with the ICU nurses who had taken care of his son in the days leading up to his passing. He inquired about their training in pain management medication and addiction, which he found to be inadequate. It seemed at the time his vet had more training in pain management for animals than the nurses had in pain management and addiction for people. This propelled him to continue the dialogue with other physicians and educators to get as many people as possible involved in order to change the status quo. Schools like SLU and Wshington University have since changed their curriculum.

Getting Involved with The ARCHway Institute

Matt lived at Recovery House, a NARR accredited transitional living in St. Louis, for a short period of time in his attempt to stay sober. This would ultimately lead Don to ARCHway and to John Stuckey, the Executive Director of Recovery House at that time. He is the visionary of the ARCHway Institute and a person in long-term recovery himself.

Don was immediately attracted to the work ARCHway was doing. He was that parent who wasn’t going to spend another $500 dollars on treatment or housing because he’d done it so often and for so long. So, he knew many other people would benefit from the small $250-$500 dollar scholarships that ARCHway provides. This disease can bankrupt a family quickly. Treatment is expensive including not only medication and therapies, but court fees and transitional living as well. Don spoke with John’s parents and co-founders of ARCHway Dan and Jan Stuckey, who shared their personal story and struggles as caregivers. He felt their support, connecting with the way they provided hope and education to people and communities needing it most. He wanted to be a voice, and today, he is a voice for his son.

“Silence is deadly,” Don said. “You can’t be silent if you have a family member struggling with addiction. You have to tell everyone: your neighbors, relatives, even grandma and grandpa.”

Matt’s life with addiction had a negative rippling effect on his family and his friends. That rippling effect continues, now positively, through his Hope Fund Sponsorship through ARCHway. His story told through Don’s voice continues to raise funds and provide scholarships for others struggling with addiction.

ARCHway is proud to have Don Willey as part of our community of hope and is forever grateful for his dedication to this work.