“John, Jan and I wanted to share with you some of the final results from this year’s Northeast Ohio ARCHway Golf outing at Hemlock Springs. We are very pleased to tell you we exceeded our financial, networking, driving awareness and making a difference in someone’s life goals. We would also like to share some of the top lessons learned as it may impact some of our decisions as we move this organization forward. I do have a couple stories mixed in that at least remind me why ARCHway can help serve a real need in our communities.

Our target was to make a minimum of $3,500 and then have ARCHway make a donation to Glenbeigh Hospital for $1,750. This donation was to be used by Glenbeigh to help offset an individual in recovery who has a financial burden. We are pleased to say we raised close to $13,000 and were able to donate just over $6,000 to Glenbeigh to be used to help make a difference in one or more individuals’ life.

I do want to pass on a story here. It all starts with John and Frank talking about the golf outing at a Men’s Sober House in St. Louis. In the end, John & Frank brought out 3 men from St Louis from the house to volunteer at the golf outing and stay the weekend with the Stuckeys and Martins. Jan and I got to tell our story of ” Why ARCHway” at a Glenbeigh Board Meeting as well as an update on the golf outing. One of the Board Members from Glenbeigh decided that in addition to sponsoring a Tee Box they wanted to pay for 4 men from a Niles, Ohio, Men’s Sober House to come play golf and show them how to have a fun day being sober as well as having them see public support for their journey. So it was very special that 20% of our golfers were individuals who were in a transition stage of their journey. From the individuals we met and talked to, I think this was a very impactful event for these folks. It turned out that one of the gentlemen won the 50/50 and turned around and gave half back to the event. This was probably one of the few people who actually could afford to do this and had a huge impact on the rest of the people at the event.

Probably the biggest gain in public and political networking was around contacts with the Ohio Attorney General’s Office and Rock and Recovery Radio out of Akron. We had a meeting with a representative of the OAG office and got a letter of support for ARCHway Institute: 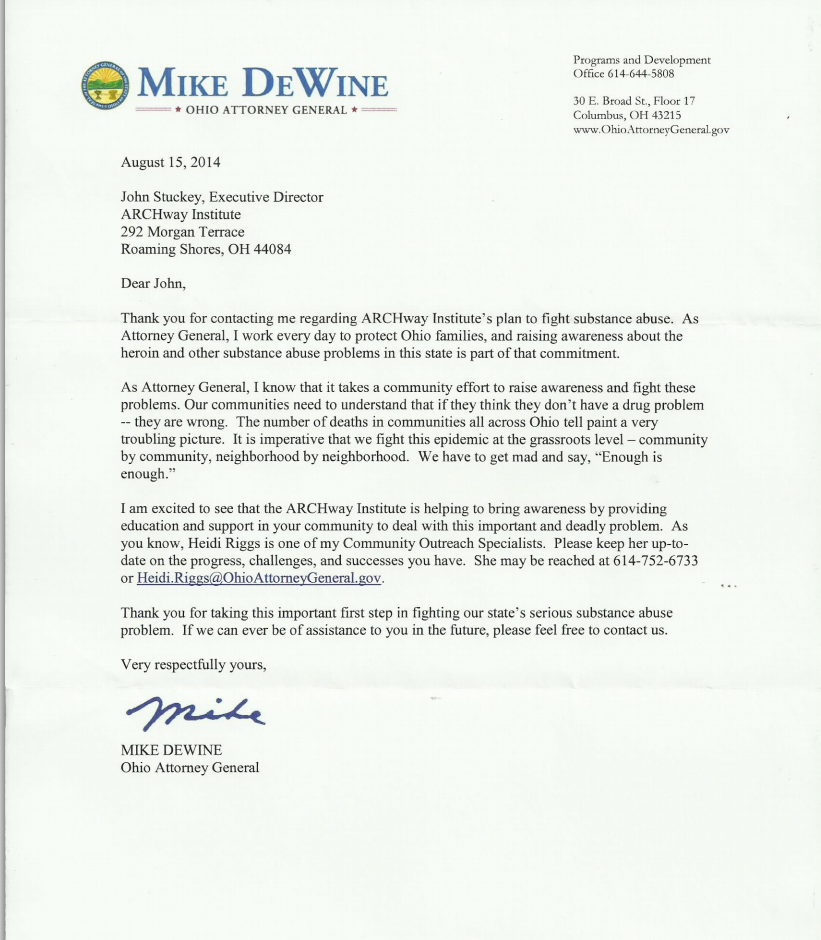 We also made contacts with Rock & Recovery Radio out of Akron. Jan and I did an interview for the radio in July and set up a series of interviews that were done at the golf outing.

One other side note is John was asked by Glenbeigh to stay over a day and tour their Men’s Sober Houses in Niles, Ohio, so John could exchange ideas and bring them back to houses in St. Louis.

In the end, we drove awareness through the larger participation in the event as well as lining up 6 Radio Interviews that were done the morning of the event. This included John Stuckey and Percy Menzies as well as Scotty Martin (St Louis Men’s House and Veteran), a minister, a state representative and the CEO of Glenbeigh. These interviews will be played over the next six months.

Hoping To Make A Difference In Just One Person’s Life

Jan and I have learned over the last 18 months with ARCHway that if we just start walking, God will take us where we need to go. Last year’s story of true tangible success was around Scotty Martin who today is still clean after 12 months. His breakthrough happened at last year’s golf event.

Jan and I would like to share a story which we hope will lead to this year’s visible success. But no matter how it ends it should drive you to “Why ARCHway”. So three days before the golf outing I was talking to a community member about the outing and ARCHway and the issues around addictive diseases. She told me about her best friend who was in great depression because her daughter was hooked on heroin and selling herself to pay for her habit. She asked if I minded if I gave her my name so she might come talk to me. Of course I said yes. So Saturday after the golf outing the neighbor came to our door saying the girl had disappeared and the parents were beside themselves. Apparently she was running from the police. It turns out that John stayed over the weekend to spend some time with his family and happened to be at the house. Before it was over, John had sat down with the parents for around 2 hours. On the surface it appears the girl had hit rock bottom (we shall see) and is ready to take a recovery program seriously but there is an 8 to 12 week waiting list in Columbus, Ohio, to get into a program. Before the night was over, John had her set up to go into a program in St. Louis and is picking her up in Columbus, Ohio, this afternoon to drive her personally to St. Louis.

I know a lot of you deal with these stories everyday, but if we (ARCHway) can continue to educate and bring awareness to the general public, then the next door neighbor might just be able to help the next person. This is why we are here.”